Zak Ové’s Moko Jumbie figures are the first major contemporary works by a Caribbean artist on display in the Sainsbury African Galleries.

As part of the Celebrating Africa season at the British Museum in 2015 the UK-Trinidadian artist Zak Ové created two spectacular Moko Jumbie figures. One male and one female in striking black and gold costumes inspired by aspects of African masquerade and Trinidadian Carnival. They were displayed in the Great Court between 28 July - 13 September 2015 commissioned by the Museum to coincide with London’s Notting Hill Carnival.

Ové’s Moko Jumbies form part of the Museum’s permanent collections and will be on display in the Sainsbury African Galleries from 28 March 2017. The Moko Jumbies will tower over Museum visitors, suggesting their ability to foresee danger.

These figures emerged as a key feature of carnival in Trinidad in the early 1900s. Oral traditions describe the Moko Jumbie as a guardian of villages who arrived in Trinidad from the West coast of Africa to protect the peoples of the Caribbean from evil forces.

Zak Ové works with sculpture, film and photography. He uses these ‘new-world’ materials to pay tribute to both spiritual and artistic African identity. This Moko Jumbie display is part of a larger body of work that draws inspiration from the

Trinidad Carnival. The works are born from Ové’s documentation of and interest in the African Diaspora and African history. The artist’s intellectual and creative responses to this history are filtered through his own personal and cultural upbringing in London and Trinidad.

The relationship between carnival and Africa derives from the enforced movement of peoples during the Transatlantic Slave Trade. Between around 1500 and 1900, millions of people were transported from West and Central Africa to the Caribbean and North, Central and South America.

Carnival in Trinidad began as a predominantly elite event. In the late 1700s French immigrants arrived on the island to run plantations, bringing with them enslaved Africans. The plantation owners staged elaborate masquerade balls during the carnival season. Africans also brought their own masking traditions of which the Moko Jumbie is but one. Masking for Africans in the Caribbean was a way to connect to ancestors and nature as well as to

ideas of ‘home’. But traditional masquerades were also used to satirically depict their masters and turn a critical eye on plantation society. After full emancipation in 1838, Africans took over the streets at carnival time, using song, dance and masquerade to re-dress the still existing social inequalities.

Today, carnival on the Caribbean islands of Trinidad and Tobago is an all-inclusive national festival which takes place every year before Lent in February or March. It has become a global

spectacle that celebrates the rich diversity of Caribbean culture and heritage.

Africa
The Sainsbury Galleries
Room 25
The diverse cultural life of Africa has been expressed through everyday objects and unique works of art since ancient times. The Museum’s collection of over 200,000 African items encompasses archaeological, historical and contemporary material from across the continent.

Highlights on display in Room 25 include
brass plaques from the Kingdom of Benin, Nigeria, the Tree of Life (a sculpture made out of guns) from Mozambique, and magnificent wooden sculpture from Central Africa.

African ancestry who were forcibly transported to the Caribbean through the Transatlantic Slave Trade. Today, African diaspora populations continue to commemorate their heritage through carnival in multi-cultural cities. 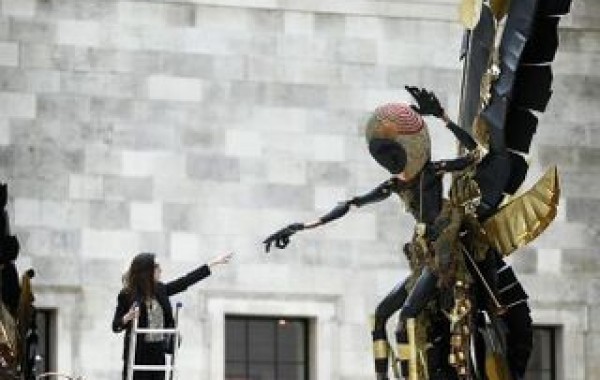