Media Release
Black and Blue: The Invisible Man and the Masque of Blackness

Yorkshire Sculpture Park (YSP) welcomes an extraordinary assembly of 80 sculptures by British-Trinidadian artist Zak Ové. Black and Blue: The Invisible Man and the Masque of Blackness, a mass of identical two-metre-tall figures, creates a striking statement within the Park’s 18th century landscape. Powerful and totemic, the impact of the group is amplified through their repeated forms, facing forward to confront the viewer en masse.

The installation builds on Ové’s 2016 project for the 1:54 Contemporary African Art Fair which saw 40 figures sited in the courtyard of London’s Somerset House. In this location, the installation directly referenced Ben Jonson’s play The Masque of Blackness, which was enacted by Anne of Denmark and members of her court at Somerset House in 1605. Featuring white actors in blackface, the play was reflective of the societal shift towards a preference for lighter skin in the early 17th century. Ové also alludes to Ralph Ellison’s Black and Blue: The Invisible Man and the Masque of Blackness (detail), 2016–17. Courtesy the artist and Vigo Gallery acclaimed novel The Invisible Man, a pioneering consideration of racism and marginalised communities in America told through the eyes of its black protagonist.

Ové says he seeks to “reignite and reinterpret lost culture using new-world materials, whilst paying tribute to both spiritual and artistic African identity”. In this work, he uses graphite to explore what he describes as “future world black”. The artist is constantly seeking ways to express recognisable, traditional African forms whilst avoiding the predictable use of ebony, and exploring the sculptural possibilities of more contemporary materials, such as plastic. The form of the figure on which Black and Blue: The Invisible Man and the Masque of Blackness is based is a small dark wood sculpture given to him as a child by his father, acclaimed filmmaker Horace Ové, in the 1970s. The way in which the original sculpture has travelled across land and time, has been adapted and re-shaped, thereby acquiring new layers of meaning, is a metaphor for the complexities of contemporary identity. Although the gesture is taken from a traditional, existing form, the raised hands resonate with and reference current tensions and the Black Lives Matter protest movement.

Zak Ové works with sculpture, film and photography to explore African identity, the African diaspora and African history, building on his own experience of growing up in a mixed-race family in both London and Trinidad, or as he says “black power on one side and... social feminism on the other”. Through his sculptural figures, concocted from a dynamic assortment of materials, and resembling African and Trinidadian statuary, Ové plays with notions of identity, positing the self as complex, open, and interconnected. In 2015, he became the first Caribbean artist to be commissioned by the British Museum, with his pair of seven-metre high Moko Jumbie sculptures exhibited in the Great Court as part of the Celebrating Africa exhibition before being permanently installed in their Africa gallery in March 2017.

Ové also draws inspiration from Trinidad carnival, a tradition started by French immigrants in the 18th century as an elaborate masquerade ball and later influenced by the transatlantic slave trade. African slaves used masks and developed Calypso music to mock their masters and communicate between themselves. After the emancipation of the British West Indies in 1833, freed slaves took over the streets at carnival time, using song, dance and masquerade as a symbol of freedom and defiance. Carnival has evolved to become a national festival and is celebrated on the island every year before Lent in February or March.

Black and Blue: The Invisible Man and the Masque of Blackness extends an ongoing strand of practice at YSP, which explores contemporary international notions of identity, migration and home, including Yinka Shonibare MBE (2013), Jaume Plensa (2011) and Shirin Neshat (2011). It joins Ai Weiwei’s Circle of Animals / Zodiac Heads, which will be sited at YSP later this spring, as part of a series of new open-air displays celebrating the 40th anniversary of the Park.

Yorkshire Sculpture Park (YSP) is the leading international centre for modern and contemporary sculpture which celebrates its 40th anniversary in 2017. It is an independent charitable trust and registered museum (number 1067908) situated in the 500-acre, 18th-century Bretton Hall estate in West Yorkshire. Founded in 1977 by Executive Director Peter Murray, YSP
was the first sculpture park in the UK, and is the largest of its kind in Europe, providing the only place in the world to see Barbara Hepworth’s The Family of Man in its entirety alongside a significant collection of sculpture, including bronzes by Henry Moore, and site-specific works by Andy Goldsworthy, David Nash and James Turrell. YSP also mounts a world-class, year-round temporary exhibitions programme including some of the world’s leading artists across five indoor galleries and the open air. Recent highlights include exhibitions by Not Vital, KAWS, Bill Viola, Anthony Caro, Fiona Banner, Ai Weiwei, Ursula von Rydingsvard, Amar Kanwar, Yinka Shonibare MBE and Joan Miró. YSP’s core work is made possible by investment from Arts Council England, Wakefield Council, Liz and Terry Bramall Foundation and Sakurako and William Fisher through the Sakana Foundation. YSP was named Art Fund Museum of the Year in 2014. ysp.org.uk 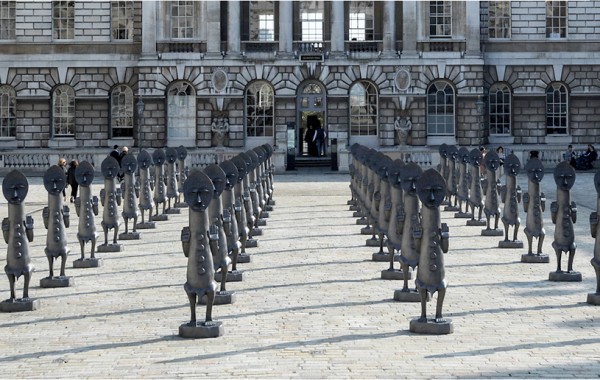