the International Men and Gender Equality Survey in Afghanistan (IMAGES Afghanistan) produced by Promundo, UN Women, and Global Affairs Canada, in collaboration with local research partners Opinion Research Center of Afghanistan (ORCA) and Afghanistan Research and Evaluation Unit (AREU), is the first study of its kind and its scope in Afghanistan. IMAGES takes a wide-angle lens to gender relations in Afghanistan, investigating women’s realities alongside the lives of men – as sons, husbands, fathers, and as individuals, at home and at work, in public and private life. The study includes quantitative and qualitative research with a nationally representative sample of 2,000 men and women aged 18 to 59 in Afghanistan, from 14 provinces in 7 regions.

Research results affirm the extreme traumas, risks, and challenges of daily life in Afghanistan, but also the resiliency of the country’s people. Approximately 80% of respondents report one or more direct, serious experiences of conflict-related violence or hardship, such as living as an internally displaced person or refugee, facing bombardment, being robbed, and witnessing beatings. Feelings of stress, depression, and worry associated with family security are nearly universal among participants.

Women in Afghanistan experience particular, persistent and multifaceted threats, including: high rates of domestic violence (80% of women report ever experiencing one or more forms of physical violence and nearly 20% report being subjected to sexual violence from an intimate partner); as well as harmful cultural practices such as baad (giving away women to settle family or tribal feuds), badal (families exchanging women and girls), and honor killings (nearly 10% respondents is aware of at least one case in their community in which a woman was killed for being perceived to “bring shame to the family” in the past year alone). These factors are situated alongside women’s and girls’ limited access to education, financial independence, and political participation — as well as ongoing security challenges which limit mobility and broader participation in public life — further constraining the lives of women in Afghanistan. Even against this backdrop, two-thirds of men agree or strongly agree with the statement, “Women in Afghanistan have too many rights.”

IMAGES Afghanistan data also show that older men demonstrate greater support for gender equality than younger men do, even when accounting for other key demographic factors and childhood influences. Young men in Afghanistan face a particular confluence of threats to their sense of identity, particularly their sense of achieving socially recognized manhood. In a time of high financial insecurity, political instability, and insurgency, young men struggle to achieve the social expectation that they provide economically and are a “protector” for their families. IMAGES evidence suggests that young men, facing these challenges to their rigidly defined masculine identity, may be compensating by retaining a stronger grip on rigid gender divisions in other spaces in their lives.

Additionally, women and men broadly disagree about women’s suitability to be public leaders. Women are more supportive of gender equality in this domain than men are: only 29% of women agree that “because women are too emotional, they cannot be leaders,” but fully 65% of men hold this opinion. Respondents, both women and men, are particularly unlikely to support the idea of women as police officers, judges, soldiers, and religious leaders. Participants in the qualitative research painted a picture of a society in which women are broadly discouraged from working outside the home, or from leaving the home at all. One young woman from Kandahar province described the restrictive environment women face, saying, “She must be covered while going outside the house, and no one should hear her laughing.”

Reflecting on their fathers’ role in childcare, up to 86% of men and women in Afghanistan remember their fathers taking care of them or their siblings, but less than 10% recall their fathers regularly cooking or cleaning. Respondents also recalled childhood homes in which fathers or brothers controlled the household in terms of financial decisions.

If you would like to read the full IMAGES Afghanistan study please click on this link - promundoglobal.org/IMAGES-Afghanistan 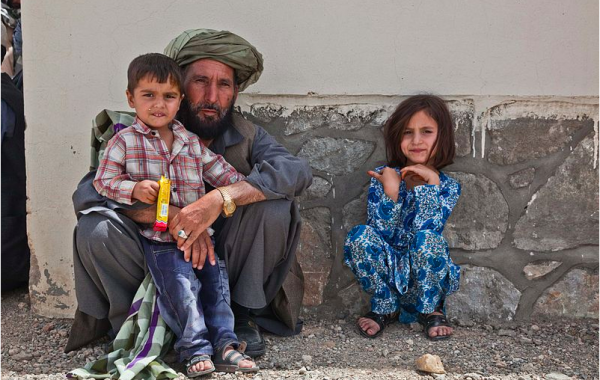