A UK aid project has dramatically reduced women’s experience of domestic and sexual violence in the Democratic Republic of Congo (DRC).

A project working to challenge the social acceptance of violence against women and girls (VAWG) in the DRC saw women’s experience of domestic violence fall from 69% to 29% after two years of intervention – a drop of 58%.

Women’s experiences of sexual violence from a non-partner also reduced from 24% to 4% – a more than five-fold reduction.

Supported by UK aid, NGOs Tearfund and Heal Africa trained faith leaders and community volunteers in 15 rural and conflict-affected areas in Ituri province to challenge harmful attitudes which drive gender inequality, and to make violence against women and girls socially unacceptable in their communities.

The faith leaders were trained to speak to people in their communities about the issue and were encouraged to raise the subject in sermons, prayer groups and youth groups.

Engaging with both men and women to challenge their traditional attitudes about gender and violence was key to achieving these results. At the start of the research, more than 50% of men and 43% of women surveyed said there are times when a woman deserves to be beaten. By the end, this proportion almost halved.

“Shockingly, one in three women are beaten or sexually abused during their lifetime, making violence against women and girls one of the most widespread human rights violations in the world.

“But this evidence shows it can be stopped, by working with local communities to challenge outdated attitudes about gender and violence.

“Every woman and girl deserves the right to live without fear. That’s why UK aid is investing in the largest global study of its kind, to provide the evidence needed to help governments and international organisations end this abuse, save lives and build a better future for everyone.”

The DRC project was part of the What Works to Prevent Violence Initiative. What Works is a flagship research programme from the UK Department for International Development (DFID), which is investing in projects around the world that seek to understand and address the underlying causes of violence and stop it from occurring.

During humanitarian emergencies, including conflict, violence against women and girls can become more common and severe. It is estimated that one in five displaced or refugee women are subjected to sexual violence.1

“Even in the most challenging of circumstances, we can never underestimate the potential to achieve change. To end violence against women and girls, we must make the connection between violence and harmful attitudes and norms on gender. These are attitudes held by both men and women, so engaging the whole community is key.

“Faith leaders in conflict affected communities in Ituri (Eastern DRC) have done just that as evident in this brief. This project has shown that this change is possible, and it’s exciting that Tearfund’s model for engaging faith leaders and communities works in tackling violence against women and girls.”

These results demonstrate VAWG can be tackled effectively even in conflict-affected settings, and that faith and other local leaders can play an important part in achieving this. The DRC is a vast country affected by years of protracted conflicts which have left millions of people living in unstable circumstances and lacking access to basic necessities.

Religious institutions are, however, often respected, and faith leaders can play an important role in influencing people’s views, including on gender and violence. 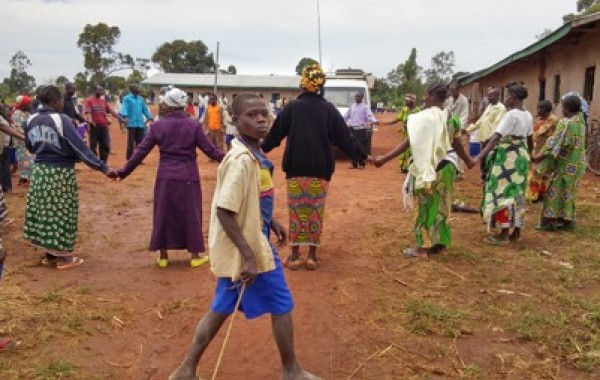