Starting at noon today, 7 May 2015 and Election Day, I urge you to take a break from the corporate media mush and tune-in to Matt Johnson's 'Midday to Midnight Marathon' - 12 hours of non-stop coverage on his radio station, Radio Cineola, featuring an eclectic mix of politics, music, soundscapes and wide-ranging interviewees from geo-political writers to semiotics experts, acupuncturists to actors and local activists to mind-control specialists in a programme dedicated to the meaning of democracy and its role and importance in the 21st Century on a local, national and global scale.

A passionate pursuer of the truth that lies beneath much mainstream coverage, Matt will be asking the vital questions that others most often avoid – the role of the media and lobbyists, the faux left, political correctness, the extreme centre, self-censorship, propaganda, sovereignty, civic engagement, oligarchies, fake uprisings, NGOs, Social Media, mind-control, spirituality and much, much more.

I know what election coverage I'll be following tomorrow. 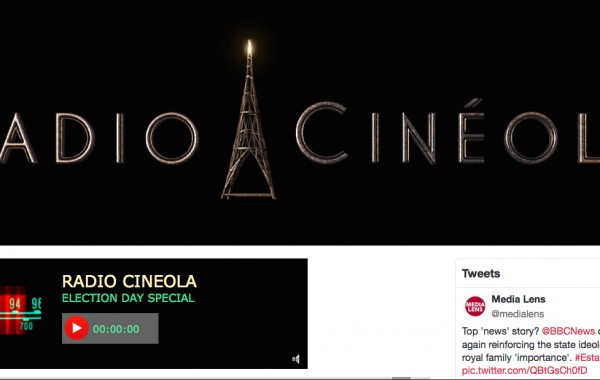