Be warned, the following text will use all possible synonyms for the colour ‘green’ and may cause feelings of awe and vertigo

Have you never been to the Peak District before?  If like me you’re an urbanite, you may be wholly unaware of the relevance of it’s being. Well, let me try and set the scene: serene green fields, sun-dappled by peaceful cloud-drift. Velvety rounded green hills dwarfed to the point of ridicule by colossal mountain range. Everywhere you look, different shades of green: chartreuse, olive, emerald, lime, jade, any shade of green that you could possibly imagine: nature resplendent in her utmost majesty.

This was the setting for the Abandon Normal Devices (AND) Festival 2017  Upon arriving at Hope, the Ladbury team with all of our “city-savvy”, assumed there would be an abundance of taxis, waiting for the travel-weary to hop aboard and transport us to civilization (equipped with bar and fireplace). But instead, we were met with a bracing wind, a field, some sheep, and a dirt track. Luckily, a charming woman called Helen who works with the National Trust spotted us and offered us what turned out to be a dumbfoundingly scenic ride to our rustic abode, nestled in the valley, The Innkeepers Lodge.

Our first port of call was The Devil’s Arse, or otherwise known as the Peak Caverns where the Listening to the Dark event would take place. Despite its questionable name (given apparently because of the flatulent noises produced by the air-circulation within the caverns) the opening to this incredibly huge network of caves was framed with inviting bright jade and deep olive shrubbery. As soon as we entered the cave I was overcome with the sheer size of the place, I felt so incredibly small in my human body: Jonah looking up to a former freedom through the blowhole... I was quickly snapped back into reality upon hearing the sound system switch on as the technicians set up the for the Saturday night’s events.

The cave was magnificent and my imagination ignited with images of primordial, magical, holy and blood-soaked ritualistic scenarios. Taking place in the first cavern was The Hive by Indonesian artist Ikbal Simamora Lubys. His sound installation produced a bespoke, sculptural musical odyssey in response to the mouth of the Peak Cavern. Using pipes, strings, and percussion, he produced a larger-than-life resonator with vibrating chimes. This all-consuming “buzzzz” gave the illusion of the stalagmites suspended above, shapeshifting into giant hanging hives. In the dark, with senses deprived, you could almost feel the flutter of the bees against your skin.

We then continued our walk further up into the Arse when we came upon the artist Mark Fell’s son in the darkest of the dark. He was casually setting up the equipment for his father’s exhibition, where he gave us a full run through behind the concept of Extensionless Thought Points. With its quick bursts of red and blue light and intermittent industrial soundscape, followed then by long intervals of silence, then again by sudden bursts of sound and light; it was easy to forget that I was standing in the cave with a group of people. The opaque shadows created by the jagged glimpses of light quickly brought me back to feeling tiny inside this omnipotent orifice of the earth. The darkness caused adrenaline to course through my veins… All instincts were telling me to get back up to the marvellous greens outside; when I would catch sight of small lush patches of forest green moss growing in between the rocks of the cavern, I became a giant, looming over all existence inside the deepest depths... of The Devil.

We then embarked on a rugged walk through a misty dusk. A throng of festival goers appeared all around, bewitched like moths they swarmed towards a vivid purple light rising from Winnats Pass. From afar it looked like the great V-shaped valley was experiencing its very own Aurora Borealis, but as you got closer you began to see brilliant violet waves rolling overhead. This clever installation by Daan Roosegaarde and Studio Roosegaarde, gave the audience an insight into the geo-glacial history of this gully which several millennia ago, accommodated a tropical ocean. The lasers sliced through the turgid darkness and the smoke created undulating, magenta clouds that swelled to the highest peaks and then vaporized as the audience flailed and grappled, attempting to catch a piece of the action like toddlers after bubbles, chasing their own imagination.

Returning to London from AND Festival, I felt like I’d been on another planet for two days. The purpose of this innovative festival was to take us on an art-existential journey through the verticality of the peaks and caverns of this ever-evolving planet that we are born out of and will eventually return to. The ingenious and creative minds of the artists involved should be celebrated for executing with such ingenuity the awe-inspiring art that managed to reflect the raw power of this ancient landscape and question exactly how we fit within: past, present and beyond. 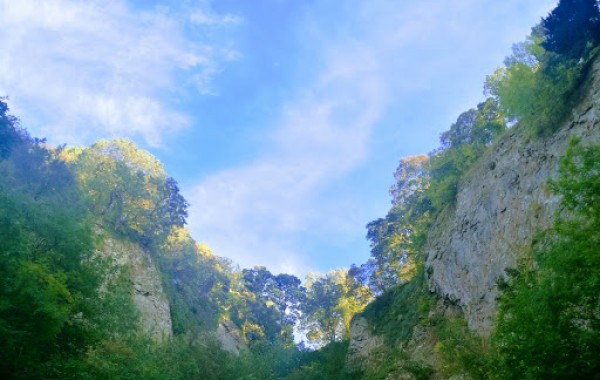