As winter thaws and the darkness gives way to the first glimmers of spring… With pleasure, we announce the vibrant and eclectic programme that sees the city of Salisbury resound with artistic encounters of all kinds: the Ageas International Salisbury Arts Festival 2017

The 2017 programme surprises and delights, this year looking westwards across the ocean and landing on the Canadian province of Québec… A region largely untapped of its rich history and arts. The festival this year will delve into Québecois culture and host a vast programme of film, music and literature hailing from the French Canadian coast. A further theme celebrated this year is mental health. The programme features the personal experiences of artists who strive through creativity and imagination to unravel the stigma surrounding it.

Celebrating literary luminaries is one of the festival’s hallmarks. This year welcomes Louise Doughty (Apple Tree Yard) and Kate Hamer (Girl in the Red Coat) who will be unveiling new works and discussing past ones. Philosopher and author AC Grayling discusses The Age of Genius, an account of the development of ideas during the most exciting periods in history, The 17 Century. Oxford professor and author Freya Johnston debuts Jane Austin: the early years discussing three surviving notebooks from Jane Austin’s teenage years, prepare for drunkenness, brawling and sexual misdemeanour… In keeping with the themes of storytelling and experience the In Conversation programme this year features a rich array of guest speakers including Ann Widdecombe, Terry Waite CBE, John Simpson and Susie Dent.

The 2017 festival gives voice to artists with lived experience of mental health. Artist Viv Gordon brings us Mouthpieces, a new series of events that explore the power of art to activate empathy and pose questions about how society views and values mental health and those affected by it. The programme spans dance, theatre, film, talks and an interactive periodic table of emotions by Aidan Moesby that will take the emotional temperature of the Festival’s audience in real time. Lives on The Edge, a film double bill from self-confessed wild child Carol Morley delves into themes of schizophrenia whilst Alistair Campbell joins us for a frank and honest conversation discussing his battles with alcohol and depression.

Music is always a highlight of the Ageas Salisbury International Arts Festival, offering a lavish line up from Bollywood to baroque! The Royal Philharmonic Orchestra returns to the festival this year with Christian Kluxen and Kari Postma featuring works by Mendelssohn, Berlioz and Tchaikovsky. Championing change and diversity in classical music, Chienke! Orchestra, the most diverse orchestra working in Europe give us a rare out of London performance featuring music from the 18th century black composer, Joseph Bologne. Adding to the sumptuous musical programme, Clare Teal and her little big band serenades with Ella Fitzgerald classics: a centenary tribute to the great jazz diva. Sharing their rich palette of influences, music from pop/folk band the Fair Rain perform an evocative set whilst Le Vent Du Nord, one of the leading names is Québecois folk never fails to delight crowds with their energetic and dynamic performance style. In keeping with the typically eclectic line-up, not to be missed are vocal ensemble I Fagiolini who celebrate their 30th anniversary year with a ravishing performance celebrating the 450 years of Monteverdi: The Other Vespers performing against the quixotic backdrop and grand acoustic of Salisbury Cathedral… prepare for goose pimples.

Taking advantage of the beauty and grandeur of the ancient city of Salisbury, the festival this year features a series of open-air theatre performances. Bring bubbles and a picnic for An Opera Soiree at Trafalgar Park by the London Festival Opera. Artists from Covent Garden, English National Opera and Glyndebourne come together to perform a medley of Verdi, Puccini, Mozart and Handle in this regal setting. The Lord Chamberlain’s Men treat us to an alfresco performance of Shakespeare’s classic comedy The Comedy of Errors. Moving into a more contemporary vein, Two Destination Language brings us Manpower, a powerful and complex commentary on the shifting identity of Britain’s working men over the past 40 years. Immersive theatre company Paper Birds performs the spine-tingling Mobile, an intimate magical theatre experience set inside a mobile caravan. Simpatico with this year’s Québecois theme, a region that has boldly defined its contemporary image through its culture, a brilliantly reinvented Romeo and Juliet from Québec dance company Cas Public injects inventiveness and athleticism to the star-crossed lovers whilst Théâtre de la Pire Espèce performs quirky theatre on a table top.

If it’s laughter you’re after, heavyweight political comedian Mark Steel joins LBC presenter Matthew Stadlen to talk politics and tell jokes. Live at the Apollo star Simon Evans displays his own brand of “jokenomics” and “economedy” in his show In The Money. With cello strings still hot from his critically acclaimed Soho Theatre run, Kieran Hodgeson manages to make Mahler funny in his heartwarming show Maestro. Absurdist comedy-king Rich Hall pops by to with his Hoedown and performing with his band of virtuoso music mates… but will he “eat his hat”?

Other highlights include a vast and vibrant family programme including Lyngo Theatre, Long Nose Puppets and Lost In Translation Circus plus a performance from Ballet Black, the UK’s only exclusively black and Asian ballet troupe. Art exhibitions Hommage à Salisbury Plain from award winning artist Catherine Farish and British Art: Ancient Landscapes curated by Professor Sam Smiles celebrate the treasured landscape of Wiltshire that has provided artistic inspiration from Constable to Jarman and beyond. The festival closes with Voices of the Whale, an immersive and joyful celebration of the oceans linking our own waters with the French Canadian coast and the mammals that inhabit it. Directed by Howard Moody, Voices of the Whale combine voice and visuals transforming Salisbury Cathedral into an underwater, aural wonderland.

A true gem of an arts festival with cultural events galore and something for everyone… Not to be missed. For more information and tickets go to www.salisburyfestival.co.uk or call 0845 241 9651.

For press enquiries please call Yasmin at Ladbury PR on 0208 962 1680 or email yasmin@ladburypr.com 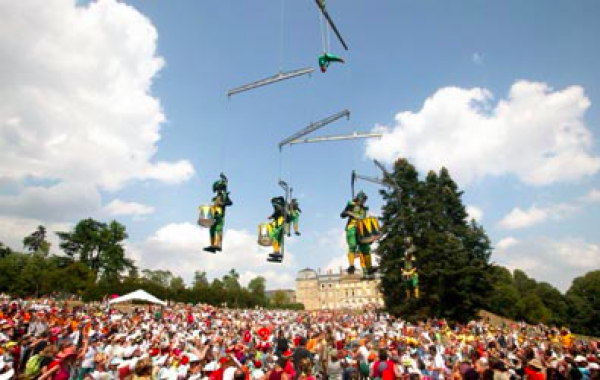