Around the world, violence and war continue to have a devastating effect on people and the planet. In a new online exhibition, Women's International League for Peace and Freedom (WILPF), the world’s oldest international women’s peace organisation, will spotlight the relationship between masculinities, conflict and peace, violence and care.

Earlier this year, WILPF announced the three winners of its inaugural photography competition, part of its wider programme ‘Countering Militarised Masculinities: Mobilising Men for Feminist Peace.’ The concept of 'Militarised Masculinities' has been defined as, "The fusion of certain practices and images of maleness with the use of weapons, the exercise of violence, and the performance of an aggressive and frequently misogynist masculinity.” (Kimberley Theidon, Reconstructing Masculinities: The Disarmament, Demobilisation and Reintegration of Former Combatants in Colombia)

Honoured to receive a large number of high-quality submissions from photographers from around the world WILPF has extended its online showcase and a selection of the images will also be presented at a public exhibition to be held later this year. Check out the online showcase www.wilpf.org/mobilising-men-for-feminist-peace

The winner of the competition was Carolina Navas Gutiérrez, for her powerful series of images ‘nos miran’ (They gaze upon us) of young men living in Colombia’s Pacific Coast, notorious for having one of the country’s highest violent death rates. Carolina’s images were described by competition judge and photojournalist Donna Ferrato as “a gift to humanity.”

Honourable mentions were awarded to Lauren Justice, for her series of images of perpetrators of domestic violence in the United States and their counsellor, herself a survivor of domestic abuse entitled "What Would I Have Done If I Would Have Killed Her That Night?” and former humanitarian aid worker, Pedram Pirnia PhD, for his single image entitled ‘Classroom with a Gun’ taken in Afghanistan.

Photographers whose work will form part of the exhibition include:

Mikkel Hørlyck’s four image series reveals the devastating reality of around 10,000 refugees and migrants in Northwest Bosnia trying to cross the border to the EU where they face huge numbers of Croatian police officers. Across the border, thousands seek temporary refuge wherever they can - in abandoned buildings, homemade shelters, and empty buses as they attempt to cross the border to Croatia.

Miki Jourdan’s image ‘First interview’ shows a young man being interviewed in Black Lives Matter Plaza in Washington D.C shortly after Joe Biden was announced as winner of the presidential election, whilst another ‘Old Glory’ depicts a masked protestor carrying a flag at the U.S. Supreme Court three days after the US Capitol insurrection on 6 January 2021 mounted by supporters of Donald Trump.

Jesse Burke’s touching portrait reveals what she describes as the ‘delicate balance that exists between the heroic idea of masculinity and the true reality of men… the presence of vulnerability and sensitivity that act as forces against the mythology of male dominance and power.”

Pete Muller, Jury Chair said: “As news reports remind us on a daily basis, the need to address the relationship between masculinity and violence is as pressing as ever. I was thrilled by the calibre and breadth of entries we received in this inaugural contest. We need meaningful, complex conversations to take place if we are to achieve change, and I believe this contest helps push that discourse forward.”

Dean Peacock, Director of the Programme said; “We were honoured to receive so many excellent submissions for our first ever photography competition and were keen to find a way to celebrate the work and share it with the public. It’s hard to imagine a more critical moment to exhibit these incredibly powerful images that capture so vividly both the lethality of militarised ideas of manhood and the emancipatory possibilities inherent in rejecting them. We are so excited to get them into public spaces around the world where we know they’ll generate important conversations about how men and women can work together for peace.”

Joy Ada Onyesoh, President of WILPF International said, “As the longest standing women’s peace organisation in the world we have long known how important it is to challenge and mobilise men to achieve feminist peace.  As the devastating events in Ukraine, Yemen, Ethiopia and beyond have shown us, militarism cannot and will never be a solution for peace and stability. The importance of our continuing work with men in local communities to mobilise their support to counteract the impact of damaging notions of militarised masculinities around the world, couldn’t be clearer.”

Full details of the public exhibition to be released over the coming months. 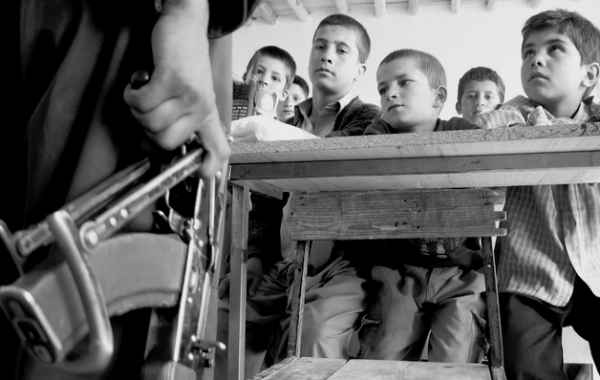