The Culture Capital Exchange (TCCE) have announced the first wave of events for this year’s Inside Out Festival returning for its sixth year with the usual erudite and eclectic mix of debates, performances, walks, screenings, exhibitions and workshops. Showcasing the extraordinary contribution made by the TCCE member universities to the capital’s vibrant cultural life, from Monday 19th - Saturday 24th October 2015, the Inside Out Festival in association with Times Higher Education, invites inquiring minds to participate in a wealth of inspiring and diverse events held across a range of London venues with most completely free to enter.

To celebrate the opening of this year’s Festival, staff and students of TCCE member universities will come together to work with opera maestro Peter Knapp, Trinity Laban Conservatoire of Music & Dance, to explore the inside out of singing, culminating in a free evening concert of operatic highlights encouraging audience participation with performances from The London International Sinfonia.

A gentle stroll with Professor Jeremy Strong, University of West London, around some of London’s most renowned Gentlemen’s Clubs will reveal the secret histories of their literary members and appearances in literature, including fictional clubs inspired by the real-life venues such as Ian Fleming’s Blades.

‘The Verbatim Formula’ will be a unique performance by a group of looked-after children and young adult care-leavers, as part of a collaborative project between Queen Mary University of London, Peoples Palace Projects, The Big House Theatre Company, the Greater London Authority, and audiences.

Celebrating the UN International Year of Light, King’s College London’s Dr Entwistle and the Configuring Light team at London School of Economics, will lead an illuminating talk and night walk through the city revealing the crucial ways light informs our sense of place and space and its significance in helping to ‘brand’ the modern city.

With writing seeming to be only half of what’s needed of today’s authors, aspiring ‘authorpreneurs’ will be invited to join Heather O’Connell of City University and Katy Darby of Liars’ League with author Mark Edwards, for frank, lively debate and advice on the essential tools needed to tackle modern authorship.

Queen Mary University of London's Centre for Digital Music, one of the leading music research centres of its kind in the world, and members of the London Chamber Orchestra invite the audience to a multi-dimensional and immersive event that explores the passionate intensity of some of the twentieth century’s lesser known music with rarely performed works by Viennese and Armenian Masters.

Other highlights include a site specific performance at the London Museum of Water and Steam with tutors, staff and students from the London College of Music, University of West London, illustrating the pandemonium created by machines, engines and literature of the nineteenth century’s industrial revolution, a lively and playful evening celebrating the art of the spontaneous from the TransDisciplinary Improvisation Network at Middlesex University, and an exploratory multi-media performance and discussion event, challenging perceptions of old age as a time of creative decline via the dynamic work of ‘All Singing All Dancing’, an older people’s music and dance group from Trinity Laban Conservatoire of Music & Dance’s Retired not Tired programme.

There will also be the chance to discover the stories behind Kingston School of Art throughout its history with a special screening and discussion event, and to discuss the role of the river Thames in Literature & Art with Professor Robert Hampson of Royal Holloway University of London.

More events will be confirmed on the coming weeks and booking opens from September 2015, so keep up-to-date here - www.insideoutfestival.org.uk #IOFestival2015 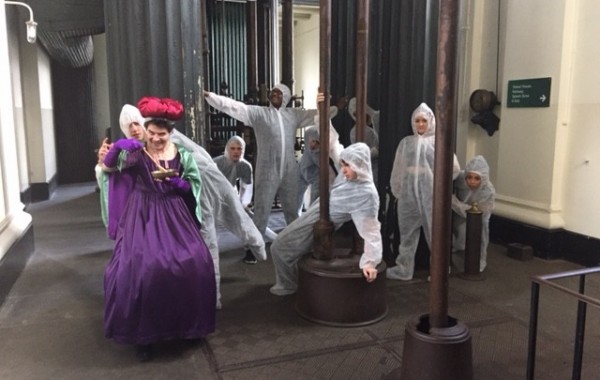