Debate or Disobedience? A false feminist dilemma we must move on from

Ceri Goddard, Associate Director of Social Justice for the Dartington Hall Trust, on 100 years of female campaigning and social change in the era of #MeToo, TIME’S UP and the latest Kavanaugh debacle

“I use words to attack… words that fly and ignite passion” says suffragist Millicent Fawcett. “ They are just words ...that fall like dust… deeds, not words” retorts suffragette Emmeline Pankhurst in Director of Dreadnought South West, Natalie McGrath’s new play The Cause which imagines these two giants of the women’s suffrage movement critique the different ways the other has chosen to act on their common anger.

Not that many women watching events leading up to Brett Kavanaugh’s appointment to the US Supreme Court this week need much imagination to tap into that anger right now. There is much less resigned shoulder shrugging, at the depressing inevitability of it all, and much more fist-shaking going on. So proud the patriarchy on display, so triumphalist the tone of the “winning” men, so really the opportunity for regressives to now strip away past gains, the tipping point from indignation into rage has been reached by many.

With feelings and stakes, this high, feminists are asking themselves, as Emmeline asks Millicent, “What will you do with [your rage] now?”

We have seen a spectrum of resistance: firstly, the words. The authentic reasoned, and compelling stories of Dr. Christine Ford and other women speaking their truth to power, even if it meant cornering it in lifts, a stream of media commentary, and the usual Facebook and Twitter chatter rising to a roar. Important words, because as Audre Lorde said, and last years #MeToo phenomenon certainly grasped, “your silence will not protect you”.

However, in a week where speaking up quite clearly could not protect these women either, with their words not only ignored but in some, presidential, quarters even ridiculed we have also seen deeds: thousands of women protesting in the streets, more still physically flinging themselves against the Senate doors and occupying its offices. They broke the law, and thus the news, in common with UK protestors now in prison for standing in the way of fracking bulldozers or risking prison trying to stop asylum seekers from being deported.

Debates have already started on which – words or deeds – and what kind of each we need more off. Generally, they go something like this: do we work the system, do research, be reasoned, act moderately… persist? Or do we reject, protest and disrupt the system even if it means breaking the law? These, of course, are sensible questions to ask. The problem comes when we divert more time and energy into debates that are ultimately the right or most effective approach, then we do on linking them together in more effective ways.

It’s problematic for three main reasons: firstly, and most evidently as a historian of the suffrage movement will attest, both the “reasoned” and lawful strategies of the suffragists and the self-harming, hunger strikes and law-breaking action of the suffragettes combined to effect change. Both insider and outsider action, speaking to and disrupting power was and is important.

Secondly, we are all too familiar with the truism - divide and conquer. Clearly, if different parts of a “cause” act and feel alone they are less effective, better still for their common foe if they do their job for them and deride or dismiss each other. We are all too familiar with more column inches given to progressive movements internal splits on how to achieve what are in fact shared goals, than what those goals are. Moreover defending and supporting a range of action is more vital than ever in the context of shrinking civil society space which is seeing increasing curbs – real and perceived - on lobbying and protest in the UK and beyond.

Thirdly and most importantly, if we recognize the value and protect both the tools of words and deeds we can spend more time with our eyes and energy on the prize. A prize sought both by those who would reform the system and those would rather tear it down and start again. A system that does not just respond to women but serves us and includes us on a truly equal footing with men. Whether old or new power structures, women must be in them and be enough of a critical mass. We know, we live every day and we saw the alternative fully exposed in the US this week – if we are not at the table we will stay on the menu.

Ceri Goddard is Associate Director of Social Justice at Dartington Hall Trust. The Cause is showing on 12th and 13th October 2018, as part of the Dartington Live A/W Season… https://www.dartington.org/whats-on/dartington-live/ 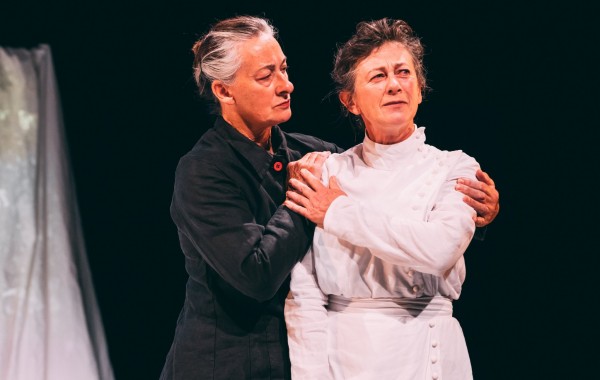