Imagine if the stars shone just for you...

Smart Oxford Playable City Commission unveils the first commission for the city, which places shared experience firmly at the heart of the future city.

January 2018: Watershed and Smart Oxford are delighted to unveil the first Smart Oxford Playable City Commission created by UK based, award winning Hellion Trace (formerly Guerilla Dance Project). The commission called for applications for new and distinctive ideas to respond to the theme Shared City and the winning commission Star Light, Star Bright maps the night sky onto the streets of Oxford connecting strangers for a shared moment of discovery and wonder.

From 18 January across seven locations around the city, visitors and citizens can discover Star Light, Star Bright. This playful, collaborative intervention brings to life to dark, gloomy streets via step activated lights. Placed in clusters across the city, the lights encourage players to come together to map star constellations from the night sky above Oxford. Star Light Star Bright beacons shine brighter as more are triggered, until the final beacon activates the whole cluster with bright beams of light bathing those beneath in a constellation of stars. The constellations represented across the seven sites are visible in the night sky in January and February and include; Cassiopeia, Ursa Major, Orion, Taurus, Cancer, Draco and Gemini.

Laura Kriefman, founder of Hellion Trace and creator of Star Light, Star Bright, says, "The stars in the night sky are so specific to each location. They are part of a city’s unique qualities that hide in plain sight, above our heads. Star Light, Star Bright draws attention to the connections between the streets of Oxford and the people of Oxford as individuals achieving something together, strangers meeting in the winter darkness to create light and connection.

“I designed Star Light, Star Bright to be democratic and citywide, demonstrating a shared city. City lighting masks the night sky; but we all seek those moments when we suddenly see the starlight, shining bright."

In August last year, Watershed and Smart Oxford unveiled the shortlist of six projects, selected from 82 applications from artists, designers, architects, technologists and creative practitioners from 28 countries around the world who had proposed new and distinctive ideas to respond to the theme Shared City.

The judges were particularly excited by opportunities for connection between the diverse populations who live, visit and work within Oxford and the connection to Oxford’s history of space exploration from Radcliffe Observatory to the European Space Agency at Harwell. As winners of the Award, Hellion Trace received £30,000 and guidance to help realise their ideas.

Hilary O’Shaughnessy, Lead Producer, Playable City, says, “It was fantastic to work with Hellion Trace on delivering Star Light, Star Bright. From dancing cranes to robot activated dancing, Hellion Trace have consistently delivered exciting playable projects that are accessible, inclusive and unexpected. We look forward to dancing together under the stars in Oxford this November.”

Sharna Jackson, Member of the Judging Panel, says, “I am excited to see Star Light, Star Bright launch in Oxford. The project delivers on the goals of a shared city, not only is it inclusive and citywide, but it also encourages and rewards shared moments of interaction between strangers. I am sure it will be a huge success”.

Councillor Bob Price, Leader of Oxford City Council, says, “'Star Light, Star Bright' is a unique and very clever application of new digital technologies. It will be a real attraction for people of all ages and offer an educational experience to those of us with only a hazy knowledge of the star constellations that we can see in the night sky. Oxford's innovative creative technology community produced many good ideas for this competition but Star Light really captured the judging panel's imagination.”

Councillor Ian Hudspeth, Leader of Oxfordshire County Council, says, “Smart, connected technology is not just incredibly helpful in our daily lives but can also look beautiful and inspire people – that is what Star Light, Star Bright is really all about.

“We know the project will capture the imagination of those who live, visit and work in Oxford. Bringing smart technology and thinking to new and existing audiences helps to put Oxfordshire at the heart of influencing how future cities will interact with citizens.” 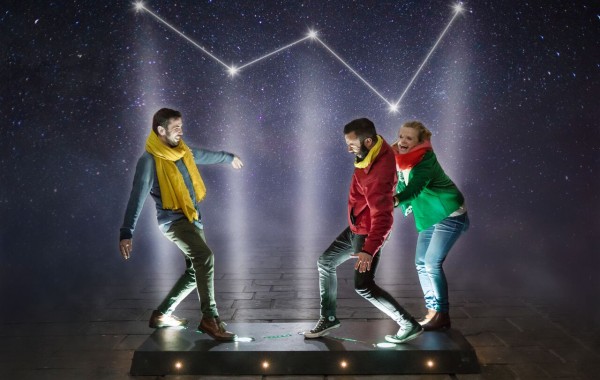