So¯Percussion From Out a Darker Sea

So¯Percussion From Out a Darker Sea

For two centuries, the coal industry formed the backbone of many towns and cities across England. Entire communities sprang into existence as fervent mining activity fuelled the industrial revolution. Integrating art, narrative, photography, film and an original musical soundscape performed live, Sō Percussion capture the environment, personal stories, and aspirations of a community fighting against industrial decline in From Out a Darker Sea. From Out a Darker Sea is not about coal, but like everything in areas rooted in industrial, there are always traces of it presence.

People and Places programme, this immersive audio-visual performance is inspired by the context and history of East Durham, an area which has struggled to reinvent itself after the crushing loss of its mining industry. Sō Percussion collaborated with film and photography collective Amber Films on the creation of a new work, Song for Billy, which was developed from Sirkka-Liisa Konttinen’s photographic series The Coal Coast and features as part of the performance. From Out a Darker Sea premiered at St John’s Church, Seaham in August 2016 and tours former coal mining areas, from Derby to Deal, this year.

Artist-run film co-operative FilmBee will collaborate with Sacred Spaces Network Project partners in each touring location to engage local people in an education programme that explores the themes and ideas within From Out a Darker Sea. Local community groups, schools and institutions will work with FilmBee to create video portraits that accompany Sō Percussion’s performances.

Sō Percussion is a four-piece ensemble based in Brooklyn, New York, who have gained international recognition for their original compositions, percussion performances and education projects. So Percussion creates and presents new collaborative works to adventurous and curious audiences and educational initiatives to students, while providing meaningful service to its communities in order to exemplify the power of music to unite people and forge deep social connections.

Amber Films was formed as a film and photography collective in 1968 and their work has focused on documenting working class and marginalised lives and landscapes in North East England. In 1977, Amber opened Side Gallery in Newcastle upon Tyne, which is committed to celebrating the best in the wider tradition of humanist photography and houses the AmberSide Collection, an archive of the work Amber produces, supports and collects.

From Out a Darker Sea is co-produced by the Sacred Spaces Network Project, produced by Forma and supported by Arts Council England’s Strategic Touring programme, The Foyle Foundation, Cockayne - Grants for the Arts and The London Community Foundation.

In partnership with QUAD Support from Unite the Union

In partnership with the Barbican Centre

In partnership with Bureau Centre for

In partnership with Deal Festival of Music

In partnership with Strange Cargo

“Through a mix of consummate skill and quirky charm, this mercurial quartet has helped to ignite an explosive new enthusiasm for percussion music old and new”

“Developing a new commission with and for an area which often feels quite disconnected from the mainstream arts offer (and the wider world itself ) with an international group of musicians has been incredibly insightful. Sō Percussion have been wonderful to work with and connected to our communities in a very honest way We’ve all been on a journey in the creation of From Out a Darker Sea and it gives us a great deal to build on towards our mission to make arts and culture a part of everyday life in east Durham” 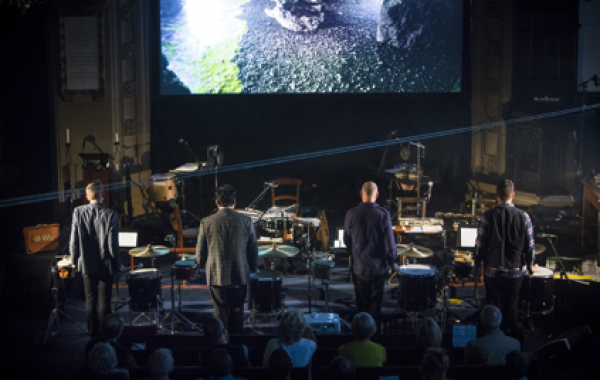