Last week, the Ladbury team sped up to Cambridge to meet a rather remarkable feline character, who’s fast becoming the talk of Cambridgeshire county.

Cinder the cat is the latest digital delight from design studio Umbrellium Spawned from the searingly brilliant mind of creator Usman Haque, founding partner of Umbrellium, Cinder the cat embodies all the qualities championed by the Umbrellium brand: citizen empowerment through art and high-impact engagement in public space through design.

Whether it’s creating glorious lightshows from public conversations in a high street in East Durham as featured in the ‘Voiceover’ project; or take ‘Another Life’, one of Europe’s largest interactive public artworks that’s transformed a public park in Bradford into an engaging outdoor environment, using lights and lasers on visitors moving through the park, encouraging them to become players on the public stage, Umbrellium has everyday people at the heart of their design ethos. Their unique concepts for projects in public space strive to make the ordinary… well, extraordinary.

This latest example of Umbrellium’s thinking outside the litterbox (…come on!) takes place is Cambridge’s only new secondary school to be built in 50 years. Trumpington Community College may sound like a skit from Viz Magazine, but sniggering aside, this is a school that takes itself very seriously. The school is designed around Danish school models with compact planning, allowing a large proportion of unstructured teaching with a high level of connectivity. The school also has a specialism in science which is showcased in the interior of the school. The design of the school follows a high sustainability agenda including the school’s commitment to sustainable energy by the installation of solar roof paneling. Umbrellium created virtual pet cat Cinder to act as an interactive school mascot who reflects the environmental changes in the building, thus communicating to the school community as whole, the impact of the environment on the building and the changes occurring because of it.

The mechanics of the techno tabby is essentially, that she is an app. The app is downloaded onto the students’ learning tablets and Cinder pops up randomly on any tablet to ask for food, to be played with or curl up and go to sleep. Cinder also appears on a giant screen in the school’s beautiful atrium where she sashays amongst the pupils, increasing in size as the students interact with her. Cinder represents the state of the school environment by changing colour according to the weather outside and the amount of solar power harnessed from the school’s roof paneling the previous day.

Last week at the school, the charming Trumpington students along with equally charming Usman Haque, demonstrated Cinder beautifully to the Ladbury team as well as the BBC and the good and great of the Cambridge media. We were delighted to meet her in the pixels and await the next astonishing innovation from Umbrellium. 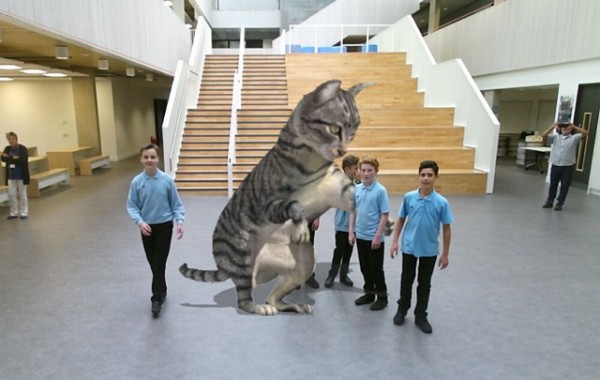