Posted on December 16 2019 by Danya Agababian

The South West Creative Technology Network (SWCTN) is a £6.5 million project to expand the use of creative technologies across the south west of England. The current cohort of 24 fellows are focussing their attention on automation, often regarded as 'the ‘quiet’ revolution, working in the background and changing the way we live. Across a range of sectors the fellows are exploring the frontiers of automation technology and its applications, to ask: What already exists? What’s new and what’s good in automation? Where are the gaps in the market? What are the challenges? What are opportunities and possibilites out there?

Over the coming months we will share some of the fellows' thoughts and ideas starting with the blog below from visual and multimedia artist Ruby Jennings.

Worried that facial recognition technology marks the end of all anonymity?

Here’s some ways to confound, confuse and avoid it.Facial recognition technology is with us and its probably here to stay. News about the use of facial recognition scanners in London’s Kings Cross station, used with no signage or information about whom is receiving the gathered information or what its purpose might be is deeply disturbing.

Whilst our initial reaction at this Orwellian dystopia is to want to
run away and hide in the woods, it’s evident that most of us still
engage with and (dare I say it) enjoy using modern technology.

In the long run deep societal change is needed, involving regulations on technology and tech companies to protect privacy, but governments worldwide are struggling to engage with the issue.

The populist use of the politics of fear has aided this as a frightened public demand increased CCTV stop terrorist threats and other widely publicised yet often intangible fears.

So what’s needed is a middle path, ways in which we can engage with
the world around us and yet still maintain agency and individuality.

Facial recognition technology is currently far from perfect although the development of generative adversarial networks and other deep learning technology means that it is likely to rapidly become more efficient. Before that point though here are a range of ways in which we can currently buck the system.

1.Be black (and preferably female)

Like most modern technology facial recognition is developed using datasets of test faces. These are almost always based on white western male faces. This means that the technology is much poorer at picking out black faces particularly those of women. This is a bit of a double edged sword as it can add to the sense of the whole world being biased against you (ask any person of colour who has tried to use a modern sensor operated hand-drier or Alexa how frustrating this can feel). There is also a much higher recurrence of false positive data which means even more chance of being stopped and searched without reason

There are two main ways to avoid facial recognition- cover up or distraction.  Project Kovr - https://projectkovr.com/designs.html - is a tinfoil jacket which zips up over your face, but you can make your own at home with a handy roll of kitchen foil.

3. 3D print yourself someone else’s face

This is rather the extreme end of the scale but http://www.urmesurveillance.com/urme-prosthetic is a site where you can download and 3D print an artists face in silicon. Various people have used this to pass through customs etc although its instantly not a win the moment you need to smile, cough talk or eat or drink. Might be worth a second glance next time you roll past a particularly weird looking expressionless person at the airport though!

You can also attempt to cover up with a balaclava, fake nose, wig
beard and glasses but the problem with all of these options is that not
only are they instantly recognisable in real life but you also look like
a bit of a dick.

To evade Facial Recognition and stay cool a different approach is needed.

Confuse the hell out of the computer whilst still being yourself.

CV Dazzle, a brilliant (and free) resource which uses out there makeup and hairstyles to confuse computer vision systems. It works by messing the play of light and dark on the face to confuse a computer into thinking its not a face.

What is particularly great about this one is that the new romantic/ festival/out there styles required to work for this are comfortably easy to adopt for radical lefties, anarchists, punks and the like but really fuck with the self image of anyone with a bit of a neo-Nazi tinge

However good makeup skills are needed to make this work. The more  asymmetrical the better with key facial points needing to be covered in order for it to work.

Instead of covering up or camouflaging a face Hyperface works like moth camouflage by presenting a myriad of faces for the computer to try and pick from, stopping it from being able to recognise or focus on the “real” face whilst seeming quite innocuous to human eyes. It’s printablity onto scarves, t shirts and other garms makes it a classy Bristol win (we just need to stick it on a catsuit right?)

Unfortunately more complex systems (like Apples Face ID) use infrared  which bounces rays onto the contours of your face.

Embedding infrared LEDs into a visor so that they shine across the wearers face. Allowing the wearer to not only be undetectable but also potentially look like someone else

“In 2018, researchers from Fudan University in China, the Chinese University of Hong Kong, Indiana University, and Alibaba Inc., used an array of tiny infrared LEDs wired to the inside of a baseball cap to project dots of light onto the wearer’s face. These dots were invisible to the human eye, but confused the computer vision and made the face unidentifiable.

The researchers found that they couldn’t just hide the wearer’s identity, however – they could also make the computer think they were someone else altogether. Using the LEDs, in 70 per cent of tests the researchers were able to trick the FR system into thinking their colleague was Moby.” (Wired 2019 )

So that's it guys.

Get a visor and look like Moby. Or else pretend you're a moth.

To learn more about SWCTN check out the website  https://swctn.org 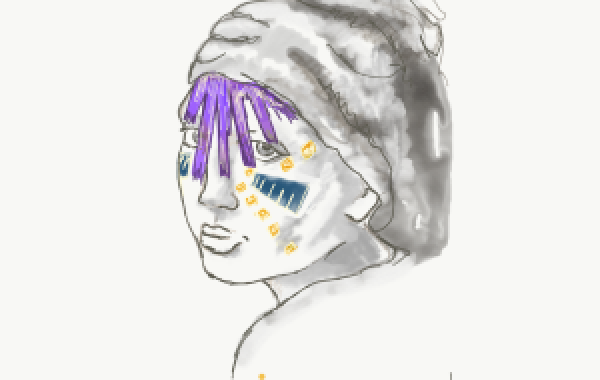