Glasto… Where kids and Grime come of age

How could we not mention the Ladbury family Glastonbury experience?… What a festival.

This year was Mr. Ladbury Jr’s first Glastonbury. At the grand old age of 10, the festival was like nothing he’d witnessed or been part of before. Whilst the Ladbury team are seasoned Glasto-goers, occasionally it’s easy to miss the point of the festival through the hangover-haze, to jadedly wince at the idea of the crowds, the toilets and the general hassle that somehow overtakes any enjoyment. However, when you are 10 years old, you just see the sheer excitement and fun waiting to be had, and no amount of dirty toilets will dampen your spirits.

We shimmied to Barry Gibb, rocked out to Rag’n'Bone Man and reflected moodily through Radiohead… However Mr. Ladbury Jr’s dreams were realised when he met none other than frankly the star of this year’s festival, Stormzy. During his electrifying set on the Other stage, that will go down in history as the gig where Grime came of age, Mr. Ladbury Jr managed to wriggle his way through the crowd of thousands and shake hands with the main man himself, telling him “you’re my inspiration”, and eliciting the response: “you’re mine”…

So there it was: a milestone moment and reaffirmation of a festival where anything is possible. And what’s more… no rain, well not enough to mention. Let’s not pretend this account may have taken a slightly more negative angle had we all been swimming in mud (and other). 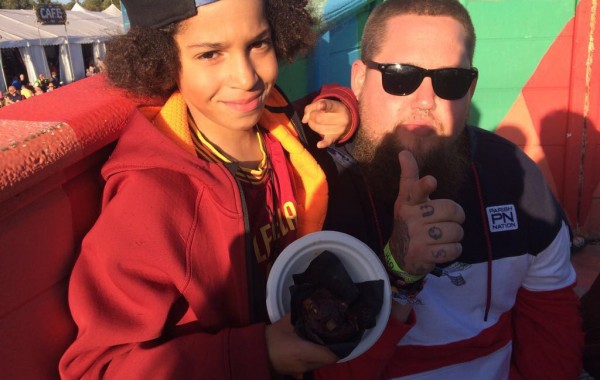