I am still not sure how to pronounce ‘Chineke’, an exclamation word in the Igbo language, roughly equivalent to ‘wonderful’ in English. However, that hardly matters. What is important is that on the evening of Tuesday 6 June, the Salisbury Festival audience was treated to a ‘wonderful’ concert in Salisbury Cathedral from The Chineke Orchestra, Europe’s first professional orchestra of black and minority ethnic musicians.

I suspect I wasn’t the only member of the audience unfamiliar with the composer of the first piece, Bologne, the Chevalier de Saint George, who I now know to be a contemporary of Wolfgang Amadeus and widely known as ‘The Black Mozart’, (even my husband, who is far more knowledgeable than me regarding classical music wasn’t aware of his work). We were treated to his Overture from L’Amant Anonyme, a delightful piece, performed elegantly by this talented orchestra.

Then came Haydn’s Violin Concerto No. 1 in C Major, starring violinist Tai Murray, who gave a truly outstanding performance. Not only was her playing superb, but her verve, passion and energy filled every inch and crevice of Salisbury’s medieval Cathedral. The slow movement with masterly playing in the high register against a delicate soft plucked base from the strings outshone the ‘lark ascending’ as if there was a nightingale fluttering above the hushed audience. Real atmosphere.

For me, the Elgar Serenade for Strings in E minor felt a little out of place in this mainly baroque programme, but then came the sparkling performance of Mozart’s Symphony No 29 in A Major. The wind section returned to the stage for this piece performed at a cracking pace. I am sure Mozart would have approved… and we did too, with not less than five minutes rousing applause at the end.

The energetic young conductor, Jonathan Haywood, currently Assistant Conductor of the Halle Orchestra, deserves his reputation as one of the most exciting conductors of his generation. I really enjoyed watching him, he was so enthusiastic and vigorous with sweeping, but precise gestures - almost dancing at times.

This concert will surely go down as one of the highlights of the exciting 2017 Festival. The sublime playing and clear musical talent was further enhanced by the rather dashing, attractive orchestra members, a feast for the eyes as well as the ears. And it’s not often one can say that. 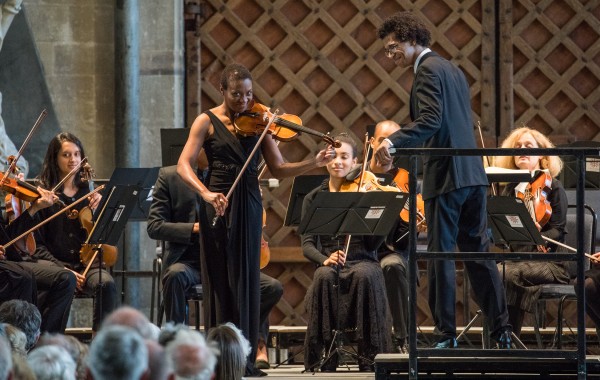