Confessions of an overseas intern | Part 6: So, You Think You Nose Soho?

Want an interesting yet obscure way to learn your way around London with the added benefit of not spending money? Look for the noses (and ears) of Soho... You can find the art on the walls of buildings and if you’ve walked around Soho, chances are you’ve walked straight past a few.

Kam had proposed this venture a while ago but we had always found other things to do instead. Today was cold and windy but we went looking for noses anyway. The plan was to split them into two days, but two-and-a-half hours later we had found all of the noses and one of the two ears (the other one we were right next to but didn’t see – Tintin is very distracting).

The noses were created from plaster by an artist called Rick Buckley in 1997 in response to the introduction of CCTV cameras around London.  We then set off to find the noses and ears starting at Floral Street, moving along to Endell Street, Admiralty Arch, Great Windmill Street, Meard Street, Bateman Street and finally ending on Dean Street. We tried to pop into the Dog and Duck pub where George Orwell went to drink but the prices were scary for two girls on a budget so while the waiter’s back was turned did a runner and we had pizza instead.

I take it that looking for ears and noses isn’t a tourist or common tourist activity given the looks people were giving us! In fact, at one stage Kam suggested we pretended not to know each other because of the big deal I made over finding my first ear.

All in all, it was a very fun day out with Kam doing something unusual. It’s surprisingly satisfying to find noses and ears around London. It’s an open secret – not noticed by most but shared by some. 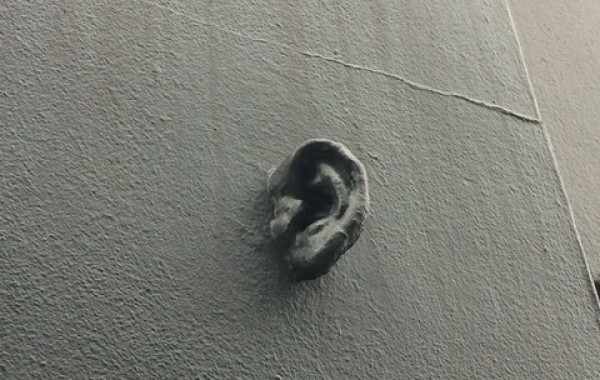