Confessions of an overseas intern | Part 4: I See Dead People

Most people think going to a cemetery is taboo – or at least that’s how it is in South Africa. I happen to like them. I find them peaceful and beautiful. On my trip, I have visited two – Kensal Green Cemetery near my work at Ladbury PR and Highgate Cemetery in Highgate, where I went with Kam. Both were fascinating to visit! Kensal Green is full of highly edible blackberries and is a wonderful place to go for a walk in given its expanse. It is refreshing greenery in a built-up area. And Highgate?

Highgate is in an entire league of its own with two wings – East and West. The West Wing is by tour only which lasts about 70 minutes and is totally worth it! Overgrown and with different ‘sections’ the West Wing is rich in history. There are 173 000 occupants, including Mrs Ann Webb who died at 102 years of age which is impressive now but was virtually unheard of in 1849!

The East Wing you can visit anytime and is home to the Father of Communism, Karl Marx as well as the author of the Hitchhiker’s Guide to the Galaxy, Douglas Adams (one of my favourite authors). It is common for his fans to leave him pens in a flower pot on his grave instead of leaving actual flowers, so naturally,  left him one and someone also left him a towel – probably reminding him not to panic. 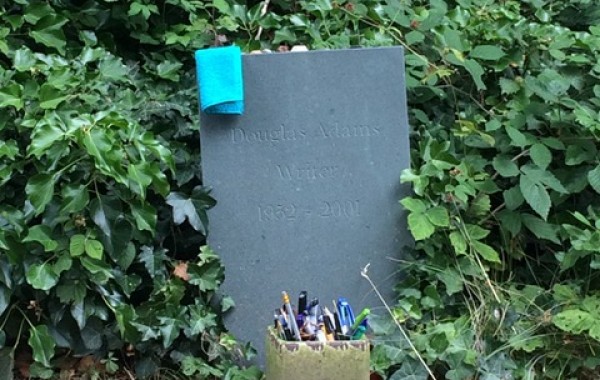