Umbrellium and Forma Art launch VoiceOver, a new public art installation in East Durham to give voice to isolated communities

Over the Easter Weekend, from Friday 25 March to Monday 28 March 2016, the East Durham neighbourhoods of Rosebury Road and Rosedale Terrace will be connected by an interactive chain of light and sound that will weave through the streets – a new public art installation created by renowned international art studio Umbrellium led by Usman Haque. Every evening for the four days, neighbours, families and friends across Peterlee and Horden will shape this public artwork by ‘speaking out’ along the VoiceOver line.

VoiceOver is a new public art commission by East Durham Creates, a Creative People and Places project funded by Arts Council England working across the East Durham area where involvement in the arts is significantly below the national average. Produced by Forma Arts, East Durham Creates commissioned Umbrellium to develop VoiceOver to explore ways of developing community cohesion in isolated places – a highly visible, and accessible, light and sound installation that travels through public space, to connect people in a community.

East Durham comprises of a number of former mining villages in semi-rural settings and two towns, Peterlee and Seaham. The population currently stands at 94,000. The area has experienced social and economic deprivation exacerbated by the pit closures during the late 80s and early 90s, although some green shoots of recovery are starting to appear. Public transport links are generally poor and car ownership levels remain below national average. The locality continues to face challenges across health, education, employment and household income. Following many years of investment in regeneration and the ambitious reclamation of the stunning coastline, a new generation of communities is slowly rediscovering an identity that is not entirely bound up in its mining past.

There is a real opportunity to explore what arts and creativity have to offer this often overlooked and underappreciated part of England. The East Durham Creates programme aims to help address some of these local issues through the arts and VoiceOver is part of that ambition.

Umbrellium, who work with urban communities all over the world, started a conversation with the people of Horden. During these sessions, people spoke about how sometimes they didn’t know their neighbours and the lack of public activity, particularly after dark. VoiceOver responds to this by sparking new connections and strengthening the local community, whilst giving residents a sense of ownership of this new art work.

People will be able to start to speak out from one of two VoiceOver Stations that will land in their neighbourhood just before the Easter weekend. The hope is that the people of East Durham will use the station as their platform to speak out about things they care about, connect with someone they don’t know, sing a traditional song with neighbours, or tell bedtime stories, and watch as their voice is transformed into light and sound on its journey to the other end of the line. 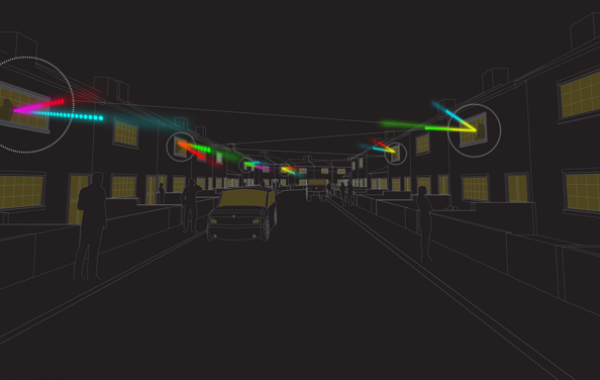