If you're in London this week, this is one not to miss. Until this Friday 1 July, internationally acclaimed choreographer Alexander Whitley is Artist in Residence at the magnificently eclectic Mandrake Hotel to showcase his pioneering use of virtual and augmented reality. A rare opportunity to experience his visually arresting digital dance installations and a chance to see him creating new work in the studio.

A Sadler’s Wells New Wave Associate and former Associate of Rambert and The Royal Ballet, Alexander founded his eponymous company to bring together world-class artists, academic research, and technological ingenuity in the creation of ground-breaking productions for stage, screen, virtual (VR) and augmented (AR) reality.

Sited throughout the hotel, each installation invites you to discover a unique digital performance space which explores the extraordinary ways in which the human body can exist in a purely digital form.

On entering The Mandrake, you will be presented with two films made with digital artists Uncharted Limbo Collective, Chaotic Body 1: Strange Attractor and Chaotic Body 2: Liminal Phase, which were developed as a result of Alexander’s ongoing fascination with and exploration into the possibilities for dance afforded by advances in immersive digital technologies such as motion capture and games engine technology.  Their specially commissioned scores from Grammy-nominated American composer Missy Mazzoli and Pakistani-American electronic musician and composer Qasim Naqvi, accompany the films and are played through a 3D speaker system.

On the terrace, in the Oshun Cabana, don a VR headset and take a breath-taking and thrilling journey towards the sun, joined by a virtual cast of world-class dancers. An interactive VR experience, Celestial Motion II produced by Guardian VR, will immerse you in a dazzling cosmic virtual landscape inspired by the dynamic world of solar physics, with a special intro by celebrated scientist and broadcaster Jim Al-Khalili.

Monster, created by the brilliant Rival Consoles’ team at Erased Tapes, will be projected in Studio 5.  Using footage from the stage production, Overflow, this beautiful, collaged film of the lead track in the score is an exploration of mood, psychology and symbolism.

“The films and experiences presented in this exhibition are reflective of a wider enquiry into the transformative power of dance beyond the confines of seated venues and the emerging creative possibilities afforded by interactive and immersive technologies which are radically changing how dance can be created and experienced. I’m passionate about what this means for audience agency and participation in movement-based experiences, which can be enjoyed without much need to understand the language of dance, bringing new audiences to the art form,” said Alexander Whitley.

The installations are free to view and experience by guests and visitors on a walk-in basis, daily. 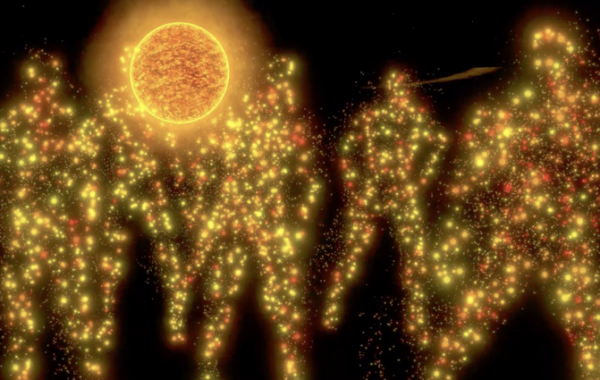