New media arts festival, York Mediale, has today announced their first music line up, including five-time Grammy award nominated composer, electronic music pioneer, and neo-classical recording artist Suzanne Ciani who will open her UK tour at the Festival; violinist and composer Laura Cannell premieres new work ‘The Untuning of the Sky’ and music producer, artist and DJ Beatrice Dillon who will perform one of her celebrated live sets.

Celebrated drummer, composer and electronic musician Moses Boyd, and ‘essence of London Underground’ Kamaal Williams open the Festival at York Theatre Royal on 27 September, with the show presented and streamed by renowned audio visual artists Just Jam. Recently signed by Gilles Peterson, Skinny Pelembe performs his unique blend of hazy afro-tipped soul with psychedelic tangents. This extraordinary and eclectic lineup represents a flavour of some of the incredible musicians set to hit York this September.

These musical pioneers join an already rich and diverse programme, including world premiere art commissions and live performances at York Mediale, a 10-day citywide festival taking place from 27 September to 6 October 2018 in York, the UK’s only UNESCO designated City of Media Arts.

Moses Boyd and Kamaal Williams will perform inside a psychedelic and fully immersive audio visual experience, specially created by Just Jam - a live audio-visual stream which has showcased some of the most progressive electronic music from around the globe, straight from the underground to the internet. Live music  performances are set to a backdrop of idiosyncratic visuals, mixed live with curated artefacts found online. This show is co-presented with local York live music promoters, Ouroboros.

On Saturday 29 and Sunday 30 September, contemporary violinist Laura Cannell premieres a new commission for York Mediale; The Untuning of the Sky Parts 1 and 2. The piece, performed over two nights, is inspired by the ancient astrological notion that the revolution of the planets generates a celestial harmony of profound and transcendent beauty, that mortals cannot hear. In collaboration with musician Jonathan Hering and visual artist Laura Spark, The Untuning of the Skywill showcase two strikingly different yet complementary pieces of work. The magnificent Church of St Margaret at York’s National Centre for Early Music will be brought to life through clefts of conjured light, projections and animation, enhancing the music in a stunning, immersive experience.

Laura draws on fragments of medieval and renaissance music re-imagined as new works for recorder and violin. In Part Oneshe will be accompanied by oscillating chamber organ and electronics from long-time collaborator André Bosman and harpist Rhodri Davies. Part Twosees multi-instrumentalist Jonathan Hering performing new interpretations of renaissance polyphony using modern day technology and his bass guitar. Eschewing centuries of performance etiquette, Hering sings multi-layered 14 to 17 century choral music in his own voice, creating renaissance music for all ears. Both performances have been made possible through the support of PRS Foundation’s The Open Fund and are presented in partnership with National Centre for Early Music.

On 4 October Skinny Pelembe will play live at The Crescent Community Venue, quickly establishing a reputation as the home of the best, cutting edge music offerings, not only in York, but across the whole of North Yorkshire. Pelembe, born in Johannesburg, growing up in Doncaster, is a sparkling multi-instrumentalist who blends his production, guitar playing, singing and MCing, to tap into unique, influence-weaving sounds that have to be heard to be believed. He is hailed as one to watch in 2018.

On Friday 5 October electronic music pioneer Suzanne Ciani opens her UK tour at York Mediale in the atmospheric surroundings of The Stained Glass Centre, formerly the Church of St Martin-cum-Gregory. Over the course of her 30+ year career, Ciani has carved out a niche as one of the most creatively successful female composers of electronic sound in the world, playing concerts all over the globe.  As well as work featured in countless commercials, video games, and feature films, she has released 15 solo albums, most recently the live electronic album retrospective Buchla Concerts1975. Ciani received the 2017 Moog Innovation Award and provided the voice and sounds for Bally's groundbreaking Xenon pinball machine.

Saturday 6 October sees producer, artist and NTS DJ Beatrice Dillon perform a live set to mark the close of Alexander Whitley’s installation Strange Strangerat York’s Guildhall, for which she has also created the live soundscape. Her acclaimed solo tracks, remixes and collaborations include releases on labels and imprints such as Hessle Audio, The Trilogy Tapes, PAN, Boomkat Editions, Timedance and Where To Now? Dillon was also the recipient of Wysing Arts Centre’s artist residency in 2016 and is a resident at Somerset House Studios, London.

Commenting on York Mediale’s first music programme announcement, Mark Carlin, Executive Producer, responsible for the festival’s music offering, said, “We are thrilled to be able to bring such a fantastic and diverse line up of world class musicians to the first ever York Mediale. With Ciani, Dillon, Cannell, Just Jam hosting Moses Boyd and Kamaal Williams and Skinny Pelembe in our line up we have a truly diverse programme of experimental, electro and jazz-inspired music, presented in interesting and unexpected spaces across the city. This has been achieved through working with both UK and International artists and their agents, as well as local partners and funders, including the PRS Foundation, allowing us to use the beautiful city of York as a canvas to showcase some incredible talent. More announcements are yet to come." 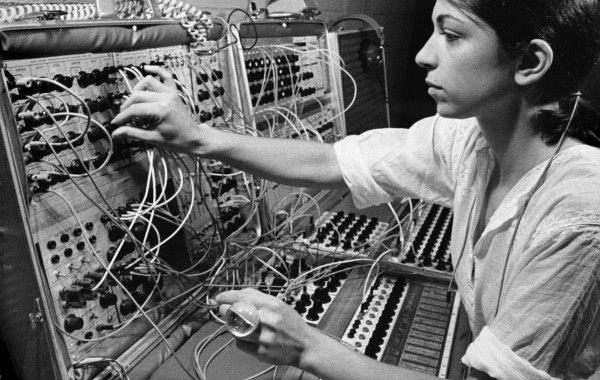