Standing at approximately 10-feet high, the ‘Autonomous Morris’ sculpture is the largest mask the artist has completed to date and is set to be unveiled to the public on Friday 5th October, during Frieze London, remaining on show in the plaza until early 2019.

Made from deconstructed and collaged vintage car parts welded together to produce a futuristic yet retro, cross-cultural totemic mask, ‘Autonomous Morris’ is a motorised ‘Macco’ – a person who involves themselves in other people’s business for the purpose of gossip and posterity.

Ové’s sculpture references his interest in the sculptural aspects of cars, using them to represent geographical movement, historical documentation, protection, and nostalgia. The sculpture is entirely made from discarded car parts including several vintage Morris Minor bonnets, referencing the assumed British tradition of Morris Dancing, which in reality came to the UK courtesy of the Moors. As an unwitting monument to the recent news that the last VW Beetle is to roll off the production line next year, the sculpture’s organic lines and animated filmic representations add to the cultural potency of the material.

Zak Ové commented, “I’m fascinated by ideas around time travel, the spread of diaspora and the positive effects of colliding cultures. My sculpture highlights my belief in the power or play embodied in masquerade, to liberate a sense of self and provide an alternate or evolving creative space both personal and communal. Autonomous Morris soaks up contemporary oral history and information, recording and storing as a ‘never forgetterer’. He listens to your aspirations, your pride, joy and anguish, acting as a receiver and archiver of memory.”

Smithson Plaza, originally designed by internationally-renowned architects Alison and Peter Smithson, and recently renamed in their honour, has a long history of showcasing public artworks of leading established and emerging artists, including Sir Eduardo Paolozzi. A dynamic contemporary arts programme was originally established in 1964 when the Economist magazine first occupied the complex, and was re-introduced by Tishman Speyer upon its re-opening in June this year, following the first phase of its renovation by architects DSDHA.

As well as the renovated Smithson Plaza, which now boasts a pocket park, Tishman Speyer has delivered 22,000 sq. ft of newly refurbished office space across six upper floors of Smithson Tower, securing exceptional rents for what is now perceived to be the premium building in St James’s. In addition to the office floors which offer 360-degree, unobstructed panoramic views of the city, Smithson Tower also contains retail and gallery spaces which are currently being leased.

A 4,600 sq ft gallery space, accessible from both Bury Street and Ryder Street, sits at the heart of the burgeoning St James’s arts district, surrounded by world-class galleries such as White Cube, as well as leading cultural institutions including the Royal Academy of Arts and Christie’s auction house.

Dan Nicholson, Managing Director of Tishman Speyer UK, said: “The re-activation of the plaza was an integral part of our strategy to reposition Smithson Plaza as the best-in-class West End office destination in the heart of St James’s. We’re very pleased to welcome Zak Ové, who has created this sculpture specifically for Smithson Plaza, as part of the wider arts programme which has been a great success to date.” 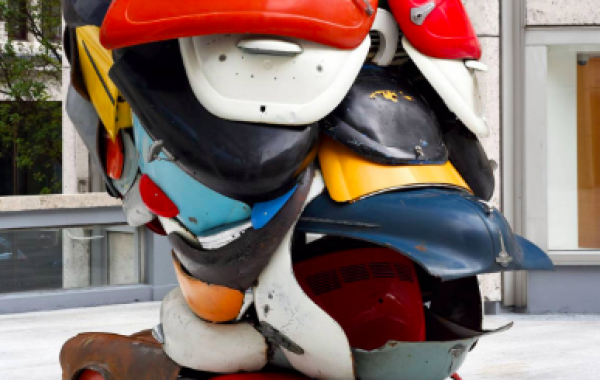